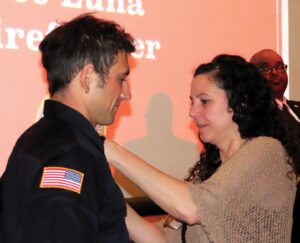 The open house included tours of the station, barbecued burgers, brats and all the sides. The refreshments were served upstairs in the building in the crew area. Fire District Board Chair Iain Irwin-Powell said fire department members hang out in this area.

They also have a breakfast once a month for firefighters to get together. The station has sleeping accommodations for eight people, and the station was built for that number of members, Irwin-Powell said. The big screen television was donated ten years ago, and they also have a physical fitness room and a pool table.

He said they don’t get a lot of calls but they did assist with the recent NCAR fire above Boulder. It was an early start to the season.

Public Information Officer Eric Abramson assisted with the open house. Abramson has been with the Fire Department for 25 years. His specialty is wildfires. He goes out west for a month every year, where he works with some of the best firefighters in the world.

The Nederland Fire Protection District Badge Pinning Ceremony for 2022 was conducted in the Nederland Community Center theatre. A screen displayed the ceremony with the words, “Community, Service, Training, Excellence and Preparedness.

Chief Scott opened the ceremony saying this is the very first time the Nederland Fire Protection District has had a pinning ceremony. All the firefighters present will be presented their badge and will take an oath all together.

Abramson presented some history of the district and area. The Arapahoe and Ute tribes came to these lands to cool off in the summer. Then in the 1800s, trappers started coming to the area and the first Post Office was built.

Abel Breed bought the silver mine at Caribou and in 1873 the road up Boulder Canyon opened. In 1905, they discovered tungsten and the area had a boom, so they needed a fire department, which was born in 1913.

The area started to grow in the 1960s with hippies and musicians and the Caribou Ranch Recording Studio, where many famous musicians recorded albums. In 1990, the fire department had a lot of little stations, so in 2002 they built the main station, and in 2009 they had a career staff.

Board Member Kyle Kociemba- Benson described why the badge is important. It includes a bugle on the collar which stands for the positions of leadership. The eight-point badge includes the Maltese Cross from the Island of Malta, where they used fire against their enemies.

“It is a physical manifestation of what is in your heart,” he said.

Chief Scott said this is an honored but dangerous career. “We respond to disasters, explosions, vehicle accidents and medical emergencies. We are there to prevent suffering and death. It’s a great honor to swear you in.”

Chief Scott was then sworn in as Fire Chief, and he swore in the officers and then each of the firefighters individually who received a certificate, the badge and a sweatshirt.

Chief Scott announced that Fire Marshal Rik Henrikson will be retiring at the end of the month after 40 years.

The Nederland Fire District Board of Directors will meet again on April 21 at 7 p.m.