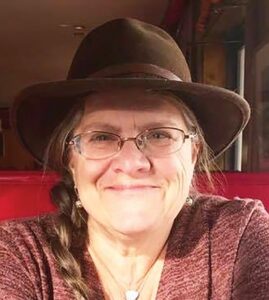 Gail Eddy, along with her husband Chris, have been assisting computer owners in the Peak to Peak region and beyond through their business Geek For Hire for over 15 years.

Before moving to Colorado she was a mid-level manager at AT&T, where she learned the art of translating normal English into tech-speak, so programmers could design and build what the customer actually wanted – and so that end users (that’s us) can understand what the programmers are actually doing.

She earned her MBA in International Finance at Fordham University in NYC while she was already the mother of two small beings. Gail and her geek husband, Chris, moved to Nederland in 1999, where he became Geek for Hire. Their two children both attended Nederland and Boulder schools. One now works at a nearby businesse, and the other is a patroller at Eldora.

Gail has a basic knowledge of technology, and totally understands the frustrations non-geeks feel when trying to get their computers to do what they tell them. Her articles for The Mountain- Ear come from that perspective. The problems she deals with on a regular basis are likely the same ones her readers are coping with.

The IT tools she wants or needs to make her work more efficient are the same ones her readers would like, but don’t know it yet. The questions she has are often the same questions we have as well. She is us, but with just enough knowledge to make her articles serve us all well – and often yearn for upgrades.

This column gives readers tips and valuable information about computers and the internet. She writes about the latest gadgets, apps and internet safety issues. Gail says that she has basic knowledge of technology, and understands the frustrations that most people feel when they want their computer to just work. Her articles often come from that nontech person perspective.

Geek For Hire serves the entire Front Range for onsite appointments. As people move away from Colorado, the company continues to serve them all over the US using their secure remote access tool.

Not surprisingly, Gail is also who you’ll most likely talk to when you call with a question, concern, or tech emergency.