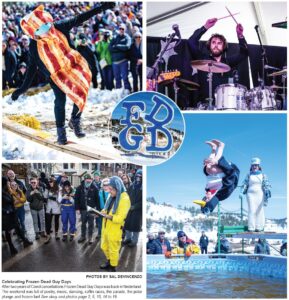 I’m new to Nederland and new to Frozen Dead Guy Days (FDGD) and it has become obvious that whenever I bring up the festival there’s a very large elephant in the room. Before the festival I heard horror stories, precautionary tales, friendly warnings, and the murmurs of locals planning to leave for the weekend. After the festival there’s a collective weighty sigh in the air that screams “we survived.” So why does Nederland feel as though FDGD is something that happens TO it?

I could see the main tents for FDGD from my driveway and witnessed all the foot traffic of not just attendees but of the festival staff and security. Every twenty minutes or less I’d see a golf cart full of crew members or a foot patrol of two to three police officers. Garbage was carted and sorted by a diligent crew who worked day and night throughout the festival; they were still sorting through Saturday’s garbage on Sunday morning. On Monday morning a crew of three worked in the snow to finish up.

I spoke with festival organizers and I spoke with Nederland police and the consensus was that the festival ran smoothly due to increased workforce and presence. There are so many components and moving parts involved in organizing a festival the size of FDGD that if all the parts didn’t work together the whole thing would’ve fallen apart. From this operational perspective this year’s festival should be considered a success… but then there’s the issue of parking.

It is very clear that the parking infrastructure in Nederland, or lack thereof, is problematic year-round. Festivals of a certain size just exacerbate this already glaring issue.

Police officers, Public Works, and hired traffic flaggers all worked long shifts stationed at the necessary areas throughout town to facilitate the parking process. Nederland’s available lots were full before 10 a.m. on Saturday; I work at Mountain Man Outdoor Store and the shopping center lot was full before noon.

Residents on the Nedheads Facebook group had mixed opinions and comments on the parking situation. One resident counted 7745 cars parked all around Nederland on Saturday, with 175 cars along both sides of Lakeview Drive. There were reports of cars parking on the east side of the Peak to Peak Highway, north of Ridge Road, posted early on Saturday. There were complaints of rude drivers parking in people’s driveways, including in handicap spots at Tungsten Village.

At this time the Town Hall staff and the Nederland Police Department are compiling their data, so we can only estimate that there were maybe 20,000 festival attendees this weekend. Is having that number in mind, while also considering Nederland’s overall lack of proper parking, enough to change opinions on the parking operations for FDGD?

There are several different perspectives to consider when trying to discern the success or failure of an event like FDGD. Festival organizers and staff view the success of FDGD differently than those who live and own businesses in town. The impact on the quality of life of local residents and the impact on local businesses seems to be where the community wants the conversation to go.

This year there were several changes instituted that caused FDGD events to be more focused on one side of the creek than the other. Chipeta Park and the Caribou Village Shopping Center had both been more utilized as part of the festival in the past, but this year these areas were greatly ignored. Big Springs Road was closed to through traffic on Saturday, completely shutting off any foot traffic to the businesses across from the Black Forest.

Wild Bear Nature Center (WBNC) and Very Nice Brewing Company (VNBC) were the only shopping center businesses to have events included in the official FDGD schedule. However, even with adjacent businesses having sidewalk merchandise and special advertised sales, cash registers were not bursting at the seams this past weekend.

WBNC and Mountain Man Outdoor Store reported revenue equal to a typical “busy weekend,” while Brightwood Music and B&F were incredibly slow. Businesses on the other side of the building, like Kaleidoscope Gallery, the Stained Glass Shop, and Spinning Silica, were reportedly “ghost towns” as there was a lack of proper signage and traffic planning to point festival-goers in their direction. Traffic complaints about Big Springs Drive being closed were addressed on Sunday, though Sunday was a slower-than-expected business day for nearly everyone, not just the shopping center.

Businesses closer to the center of FDGD appeared constantly busy throughout the weekend. Tin Shed and Salto, despite hosting live music and official FDGD events on their patio, weren’t as busy as they were expecting. Salto made just over 160 burritos for Saturday service, while Tin Shed mostly relied on selling beanies and hand warmers to cold tourists.

I went out to Ubon on Saturday night and they were absolutely packed, though they are one of the Nederland restaurants that’s open later into the night. Ned’s had a line of customers waiting outside on Sunday morning, but report that they also were over-prepared and overstocked for the festival. And 1st Street restaurants weren’t immune from this, as both Kaleidoscope Kitchen and The Deli stated being overstocked as well.

From this newcomers perspective, the relationship between FDGD organizers and the town of Nederland appears frayed and conversation seems minimal. Local businesses want to feel considered and to be involved in the festival planning process. With FDGD relying heavily on outside vendors and food trucks, Nederland business owners feel they have no impact on what should traditionally be a celebration of their town’s awesome weirdness. The festival just becomes something that happens TO them, in spite of them, and that has to be the source of dissent against FDGD.

If rumors are to be believed then all of this may be a moot point, as far as the future of FDGD in Nederland is concerned. The festival may have already been sold to Estes Park or to California or wherever and Nederland will have lost another festival in retaining its two days of “peace” in March. Even if we lose FDGD, the conversation going forward needs to be about what events or festivals the community actually wants.

Please fill out the survey about Nederland special events in this paper. Ned may be able to afford to lose FDGD, but without community involvement Ned’s identity will begin to diminish.

There are solutions, if people work together. The survey is located at forms.gle/Qoh7W3748p9acbxr7