From plains to towering peaks 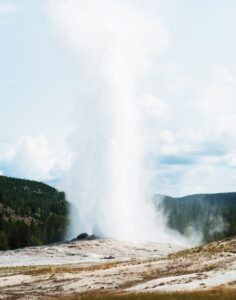 The Rocky Mountains of Wyoming Above, left; Yellowstone’s Old Faithful explodes in front of hundreds of spectators. Above, right; A distant look at the majesty of the Teton Mountains from Jenny Lake. PHOTOS BY GUIDO SENFF

Today, I’m leaving my heart in the Colorado Rocky Mountains to explore the cowboy state of Wyoming. I’m not moving there, but I have visited and think its story is worth telling. Every year, millions of people gravitate to Wyoming. With seven National Parks and the romanticism of the old west in full bloom, it’s no surprise this state attracts so many visitors.

Let’s focus on two of its most spectacular attractions. Yellowstone, the world’s first national park, is over 2.2 million acres and is home to the Old Faithful geyser. Though it’s the park’s most popular geyser, it isn’t the largest. That honor goes to the Steamboat geyser, erupting 300 feet into the sky. But don’t expect to see it erupt during your visit. It once went dormant for 50 years.

Unlike Steamboat, Old Faithful eruptions can be predicted with 90% accuracy. It received its name for the more than a million eruptions people have witnessed since Yellowstone became a national park. According to park rangers, the geyser’s minimum eruption height reaches 100 feet and the highest recorded eruption has been 180 feet. Old Faithful erupts roughly 20 times per day, expelling upwards of 8,400 gallons of water, and lasts up to five minutes.

Its steam temperature has been measured above 350° Fahrenheit. I’m guessing it’s best to keep your distance if you’re not a fan of melting. If the heat doesn’t get to you, the hefty citation from the park rangers will. It’s as illegal to approach Old Faithful as it is to disturb wildlife. It costs nothing to practice respect.

Speaking of which, Bison is Wyoming’s state animal. You can spot this incredible species roaming throughout the farming grasslands and the mountainous areas of the state, including Grand Teton National Park, which is also known for its vast wildlife, lakes, and varied terrain.

At less than 10 million years old, the Tetons are the youngest of the Rockies’ mountain ranges. Yes, by geologic standards, 10 million years old is considered young. These mountains were the result of several historical earthquakes and continue to rise. Geologists estimate that they are growing one millimeter each year. Me too! Maybe not, but a girl can dream.

From its rich Native American history to enticing outdoor experiences and eye-catching scenery, Wyoming offers a vast spectrum of opportunities for any adventurer. You can find just about anything in Wyoming, from plains to towering peaks.

You have 3 free stories remaining! Please login or subscribe to continue reading!