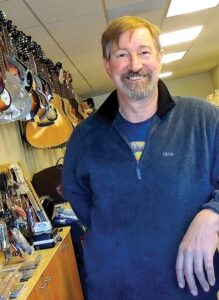 Doug Armitage writes occasionally for The Mountain-Ear when Barb needs stories on deadline day. Doug was raised in the Darkest part of New Joisey, where death was the way of life. That makes no sense, but neither did New Jersey.

When Doug came to Nederland in 1974, he was a homeless bum with a bad attitude, and joined the security staff at Caribou Ranch, sitting at the gate, looking and smelling mean.

After learning what a shower was, Doug moved to Boulder, then to Port Angeles, Washington, where he began working at the local music store. After learning that he was still an inexperienced self-centered kid, Doug moved back to Jersey, which still made no sense, and began a serious, expensive education in woodworking machinery.

After a short 20 year stint traveling all over the world learning the gritty details of engineering and application for woodworking in many types of manufacturing, including architectural, musical instruments, kitchen cabinetry, panel processing, veneer surface production, finishing, linear molding and profile knife geometry for CNC applications, CNC material handling and installations of dust collection systems for aerospace and drone manufacturing after 9/11, Doug retired to Nederland to open a small music store and changed his name, hoping the Feds would ignore him. So far, so good.

Doug and Barb met in September of 2010 and have been together ever since. They were married on February 29, 2020, right after a romantic Valentine’s Day.

Doug started writing for The Mountain-Ear with an occasional music column. He writes humor, music, small business features, and has been working on the Podcasts with Barb for many months.

He loves to write, but that sick sense of humor still gets him in trouble. Jersey still makes no sense, but at least he will never have to cross the George Washington bridge again.