Come for outdoor necessities, stay for the conversationFree Access 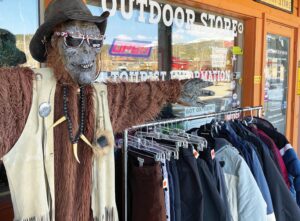 As you drive into the Caribou Village Shopping Center you may catch a glimpse of Bigfoot. It stands surprisingly stationary with its arms open wide, showcasing racks of merchandise out on the walkway. It’s Mountain Man Outdoor Store’s unofficial mascot, welcoming you into the store. It is a store packed full of camping essentials, all season clothes, souvenirs, friendly local conversation, and a little bit of Nederland weirdness.

Nine years ago John Thompson was living in Nederland and working at Eldora when he noticed a hole in the local market. “I was going up to work one day on the shelf road and realized that everybody comes up here to go outdoors and there wasn’t one specific store to that point.”

Thompson recalls that in the early days of his business his vision for the store was quite different from what it had morphed into over the years. “I started by going to yard sales, thrift stores, anywhere and everywhere I could find used goods, and I was looking at what the prices were and what kind of names there were. So when I opened the store 90% of the stuff was used.”

Thompson grew up in Raleigh, North Carolina, and has spent much of his life and career as an avid outdoorsman. Though he was an art history major in college, life brought him to San Francisco where he was a bike messenger for 15 years. He then came to Colorado where he wished to pursue a less physically demanding career while also continuing to enjoy hiking, biking, and skiing at every opportunity.

Mountain Man Outdoor Store opened on June 1, 2013, and its identity became formed by Thompson’s tenacity for meeting the customer’s needs.

“I realized this right away; I was carrying camping goods, like tents, but people buy tents once every ten years, but they’ll buy a new T-shirt once every two weeks. So I started carrying more and more clothing, especially warm clothes. It’s just naturally evolving; it’s really easy, just listen to what the people ask for, start at the low end and work your way up.”

Over the years Mountain Man has evolved to carrying summer and winter gear, locally crafted knives, and various toys. Thompson also relishes being able to fuel his creativity by designing all of the custom stickers, postcards, and T-shirts that you can find at Mountain Man.

The store displays various notfor sale oddities as well as free informational pamphlets on all things Nederland as a way to draw the customer into having a conversation.

“Tourist Information” is written on the window of the store, which due to Thompson’s gift of gab is his favorite part of owning the business.

“We get people from all over the planet that would come in here, visiting from everywhere, and people can be a little standoffish because I’m very outgoing and nice to them and they think I’m gonna try and sell them something. But then I show them a dozen pictures of moose and bears and different places to go up here, and then I give them one of the free guides to Nederland and the area.”

Social interaction with the various newcomers and locals being such a big part of what Mountain Man is, the pandemic was obviously hard on the store and on Thompson. But with safety precautions and ensuring the comfort of his staff Mountain Man was able to reopen and begin bouncing back.

When asked about where he sees his business going in the future, Thompson jokes that he’s put in a bid to buy out REI for “a couple hundred bucks.” Truthfully Thompson would love to get a bigger space, at least double the size of his current store, so he could expand his inventory. He’s also entertaining the idea of opening a second location.

“My market here is very specific because we’re right on the cusp of the outdoors and the fact that it’s just me and one or two employees it keeps me very nimble.”

Thompson notes that most of what makes his store a success is due to the people of Nederland.

“It’s a great town, it’s a lovely community, and I’ve had people come in and I know they’ve bought things just to support me and us. It’s a really tough market and I’ve watched several different businesses come and go, and I feel blessed. I feel very lucky that all the people are so receptive and nice to us!”

Mountain Man Outdoor Store is located in the Caribou Village Shopping Center at 20 E. Lakeview Drive, unit 111 in Nederland. Check out their Facebook page at www.facebook.com/ Mountainmannederland, their website at www.mountainmangear.com/, or give them a call at 303-258-3295.

Sponsored by the Town of Nederland, with funds from the American Rescue Plan Act.